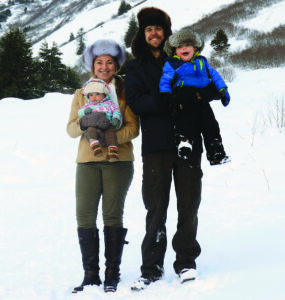 Jonathan and Amy DeVries joined the InterAct Alaska field in early 2021 with a mission to glorify God by reaching the least-reached people groups of Alaska through aviation, hospitality and missionary support. During the summer of 2015, they met at Kingdom Air Corps in Sutton-Alpine, AK. Amy was volunteering for the summer and Jonathan came to teach flying for a few weeks. The two hit it off, and both of their visions for ministry lined up. Ten months later they were married. They spent the next several years gaining experience in aviation and logistics while paying off the last of their school debt.


The DeVries family welcomed a new member in January 2022—baby Ezekiel. He joins his older brother, Benaiah, and sister, Charese, keeping mom and dad busy with three children under 4 yrs old! Yet, Jonathan and Amy continue to use their home as a pitstop where people from villages and outlying towns can rest, regroup and gather supplies around Anchorage. They’ve connected volunteers from partnering churches to send short-term teams to support the Alaska field conference and other projects. They also are leaders at SonRise Community Church (a multicultural church in Anchorage’s urban core), ministering through the food shelf, discipleship and prayer team.

Jonathan serves the Alaska field as our main pilot. Last summer, he flew InterAct missionaries to Grayling, AK, which can only be reached by plane or barge. We are grateful to our sister organization, SEND North, for letting us use their aircraft.