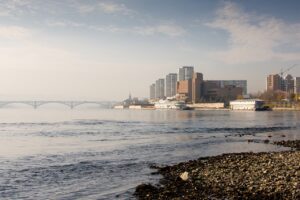 “Frankie, do you think it is alright to find happiness in listening to music?” “Of course I do!” I answered Daniel*, thinking about how we sing in The Praise Workshop together. “Why would it not be okay?” He was calling me from his hospital bed that evening. He was being treated after a sudden loss of consciousness due to issues related to alcoholism.

The Praise Workshop is a ministry with the goal of spreading the Good News about Jesus to the villages of Buryatia through native music. Members write their own songs inspired by Scripture. Visit their YouTube channel to discover more.

Daniel is a brother of ours who lives at a rehab center run by believers. He’s there to recover from many years of alcoholism, which recently caused several successive and sudden nervous breakdowns. He explained to me how someone told him that listening to music and finding joy in it was a waste of time. They said to him that believers should focus on spiritual disciplines instead. “I have to disagree with whoever told you that,” I responded. “I believe that Jesus is the source of everything good and beautiful about life, as well as joy. So, finding beauty and joy in anything good He created is a spiritual discipline!”

Honestly, I struggled to enter into a relationship with Daniel. However, this conversation was particularly vulnerable. I learned a lot more about him, which softened my heart towards him. He opened up to me and shared what he was thinking and feeling. We discussed how he had been a performance-driven perfectionist since childhood, from which alcoholism was an escape. Daniel explained that now as a believer, he feels like he is being encouraged into perfectionism again.

I gleaned that he is afraid of failing in his new faith. This fear, compounded with health issues from his past alcohol abuse, landed him in the hospital after blacking out from a seizure. He needed to know that there was grace for him.
I told him in Jesus, love casts out fear. In Jesus, our feet are firmly planted. In Jesus, the beauty of music can bring us into His presence. In Jesus, trying new things and learning new languages (Daniel is also trying to learn English just for fun.) is okay because it is fun and life-giving. In Jesus, we can take off the yoke of anxiety and rest with Him in a continuous seventh day.

"Come to me, all you who are weary and burdened, and I will give you rest. Take my yoke upon you and learn from me, for I am gentle and humble in heart, and you will find rest for your souls. For my yoke is easy and my burden is light."

At the end of our phone call, Daniel encouraged me with kind words about how pleasant it was to talk. He said: “When I talk to other brothers, they always want to help me by telling me what I should do. I appreciate that you listen to me first and then respond with something that I find interesting and understandable.”

God is good at connecting the right people in the right place at the right time. Reflecting on my life as a performance-driven perfectionist, I needed people to listen to me and share the truth. They helped me recognize that I am justified in Christ. I am in Him, fully loved and accepted. I’m glad I could share the message of God’s grace that Daniel needed to hear too.