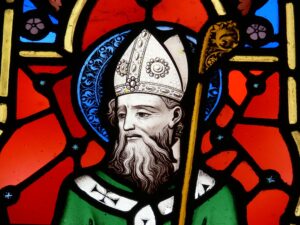 Today St. Patrick’s Day is viewed as a fun holiday to celebrate being Irish or as an excuse to party. People share legends of this saint, like driving all the snakes out of Ireland or using a three-leaf clover to explain the Trinity. These stories are simply not true, and his actual impact for Christ on the world is forgotten.

Patrick was born in Britain, not in Ireland as commonly thought. His father, Calpurnius, is described as a leader in an unspecified Roman-British city and a deacon in the church. His grandfather Potitus was a priest from Bonaven Taberna. However, Patrick’s confession states he was not an active believer in his youth.

At the age of sixteen, he was captured by pirates. They took him to Ireland, where he was enslaved and held captive for six years. Patrick writes that his time in captivity was critical to his spiritual development. He explains that the Lord had mercy on his youth and ignorance, and he trusted God to forgive him of his sins. He worked as a shepherd during this time and strengthened his relationship with God through prayer.

After six years of captivity, he heard a voice telling him that he would soon go home and then that his ship was ready. Fleeing his enslaver, he traveled to a port two hundred miles away, where he found a boat and persuaded the captain to take him. After three days of sailing, they landed in Britain. He returned home to his family, where he continued to grow in his faith.

Patrick recounts that he had a vision a few years after returning home:

“I saw a man coming, as it were from Ireland. His name was Victoricus, and he carried many letters, and he gave me one of them. I read the heading: The Voice of the Irish. As I began the letter, I imagined at that moment that I heard the voice of those very people who were near the wood of Foclut, which is beside the western sea—and they cried out, as with one voice: ‘We appeal to you, holy servant boy, to come and walk among us.’”

In his confession, Patrick wrote that God placed a burden on him to evangelize the Irish with this vision. He linked his call to the mission field to commands in the Bible. Verses like “the nations will come to you from the ends of the earth” and “I have put you as a light among the nations” and “I shall make you fishers of men” motivated him. Patrick knew he had to obey the command of the great commission and Acts 1:8, feeling called to the ends of the earth. For St. Patrick, the ends of the earth was Ireland.

Acting on this dream, Patrick returned to Ireland as a missionary. He first landed in Wicklow, at the mouth of the river Inverdea, which is now called the Vartry. He established new Christian communities. Wealthy women were converted, some of whom became nuns in the face of family opposition. Kings and tribal leaders responded to the gospel as well. He said of the Irish, “Never before did they know of God except to serve idols and unclean things. But now, they have become the people of the Lord and are called children of God.”

Patrick was the first cross-cultural missionary in western Christendom. He was the first person in western Christian history to realize that teaching all nations included the barbarians outside the Roman Empire. No one had ever previously possessed such convictions to reach the unreached. He is a man who deserves his own holiday. Unfortunately, this forefather of western missions is celebrated by drinking and parades. We should remember him for his ministry and desire to make Christ known where he was not. He should be remembered as St. Patrick the missionary.