This article appeared in the Winter 2022 edition of our quarterly newsletter, the InterACTION. Click here to read the complete publication. 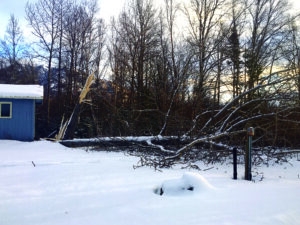 The aftermath of days without power in 20-35°F below zero tempera- tures has particularly impacted InterAct’s Lazy Mountain Campus in Palmer, AK. The storm caused a swath of destruction throughout the city. It was common to see downed trees, snapped power lines, dam- aged power stations, flipped airplanes and trailers. A tree fell away from apartments on campus during the storm, avoiding major damage.

After the storm, a small team of InterAct staff on campus worked around the clock on broken plumbing and heating in multiple frozen dwellings on site. Three days after the main impact of the storm, Toby Curtis, InterAct ministry coordinator at Lazy Mountain, stated, “There’s only three of us here, and we could use more volunteers to help. We also just need rest.”

Join us in prayer for InterAct’s ministry team in the storm-affected areas of Alaska to have wisdom, support and rest. If you would like to help the Lazy Mountain Campus recover from the storm and advance in ministry, you can give online by clicking the button below or by mail.